Back from the Newport, California Audio Show! 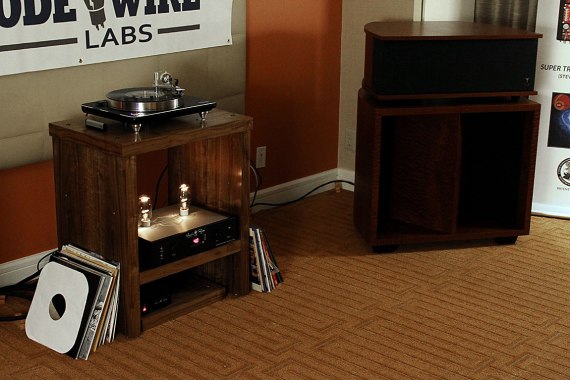 The LIO in Chicago with the big Harbeths was emotionally engaging, and delivered on every sonic front I could grade it on, and Newport was no different, except the Voltis expanded the sound stage, and brought an even deeper organic, and visceral impact to the music. That, and real quickness. Attack speed on notes, and transients was blinding. The efficient Vittoras were able to enjoy far more headroom, and shrugged-off big, fat dynamic swings with Rossi’s 25 watts on tap.  Deep bass guitar notes, and inflection? Check. Open, spacious air around vocals, and pinpoint instrument separation? Yup. Guitar-string pluck, note sustain, and three-point, fade-away jump shot decay on strings, cymbals, and high hats? Gawd yeah. While, ultimately I felt that for peak performance the big Voltis could use more breathing space than what was on tap in a Hotel Irvine hotel room, there’s no denying that Roberts, and Rossi had tuned this system for a near-field experience I won’t soon forget.

The Red White & Blue was being waved high in Room 332, by Volti Audio (“Built by hand in Benton, Maine”), Vinnie Rossi Audio (“Designed and custom-made to order in the U.S.A.”), and Triode Wire Labs (“Proudly & meticulously hand-made in the U.S.A.”). Is there an election going on or something? In this room it was analog-city here, starting with an Acoustic Signature Triple X turntable ($5,995) and TA-1000 12″ tonearm ($1,995), feeding the Vinnie Rossi LIO integrated amplifier ($10,470 as configured), and driving the Volti Audio Vittora loudspeaker ($25,750/pair). I am assuming that all cabling was by Triode Wire Labs, including their The Obsession power cord ($1,299) and American Speaker Cables ($599, lengths not specified). As configured, the Vinnie Rossi LIO integrated included a DSD/PCM DAC that can handle 384kHz recording, if you have any, and a class-A zero-feedback JFET design phonostage. The amp section is a hybrid: class-A triode for the linestage, and a MOSFET solid-state for the output, delivering 25Wpc into 8 ohms.

If your boat is floated by large, great-looking, wood-cabinet horn speakers, then you are off and sailing with the Vittoras. These whopping beasts weigh 160 lbs for the bottom cabinet and probably about the same for the top cabinet, I was told. To be clear, the Volti Audio Vittora is described as a three-way, fully horn-loaded system, with a separate active low-frequency cabinet that the user isn’t required to purchase. These speakers are rated at a sensitivity of 104dB. They are available in different wood finishes. (I think I saw them with the “Sapele Pommele” veneer, which seemed Bentley-worthy.) With those speakers angled directly at my listening chair in the middle of the room, I heard a couple of LP tracks from the great Ella & Louis Again—”Makin’ Whoopee” and “Autumn in New York.” A little early for the latter track, but I’ll take it any time of year. There’s Louis in all his gravelly glory: I could hear every one of his breaths and swallows, and feel him reaching for that handkerchief of his. And Ella! Did that woman ever sing a single pitch off-key? I’m not aware of it. Vinnie, Volti, & Triode—this trio of American patriots gets my vote! Volti Audio is another company that makes a big hunking speaker that reminds me of the old Klipsch speakers. They are big, but also extremely efficient. They are also built by hand right here in the USA (in Maine). OK, so what sets these guys apart? Well, they were playing rap and playing loud! When is the last time anyone heard that at an audio show? Sure, I heard the occasional Linkin Park and Massive Attack timidly played elsewhere at the show (maybe some of them had read my previous blog post, LOL), but these Volti Vittora speakers were spitting hard core street lyrics, the kind mothers run to cover their children’s ears for. Well it was refreshing, and the Vinnie Rossi electronics and Triode Wire Labs cables sounded fantastic too. Thank you for shaking the show up a bit!